Humans are not natives of Jaeis. Long ago the other creatures of the world noticed strange footprints in the snow, bones in the sand, something rustling the leaves. These were the heralds of the Humans, whose curiosity and ambition had led them to Jaeis from another world. The Humans survived and prospered in the new world, and made both war and peace with the other peoples of Jaeis. They are as sturdy, diverse and numerous as the rocks in a riverbed. 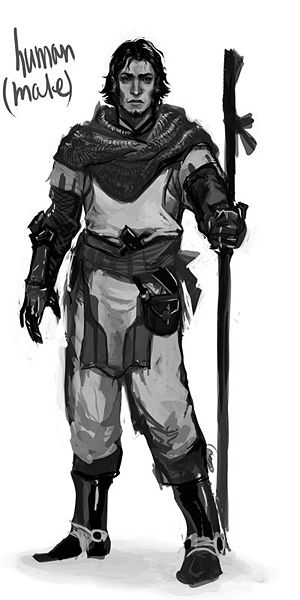 Humans vary widely depending on geographical location, class, and genetics, much more so than any other race. They stand between 5′ and 6′ feet tall, generally speaking. Their skin-tone ranges from very dark to pale with hair in shades of blond, brown, black, and red, fading to grays and whites in old age. Other races envy the humans for the beauty of their eyes, in which can be found many vivid colors. Humans can live one hundred years or more, but very rarely are they actively contributing members of society at that extreme age.

Humans like to distinguish themselves by tattooing their skin, styling their hair, lacquering their nails, and dressing in different fabrics. They are the most diverse race, and absorb much culturally from others. Occasionally, Humans even take on slight physical features of other races.

Humans do not live as long as some of the other races. Aware of this trait, many Humans are eager to work towards their extremely lofty goals and seek to affect the world in radical ways. Humans have a tendency to desire control and immediate gratification. They are also curious by nature and are liable to seek out more trouble than is good for them. They value independence and the survival and prominence of their race.

Humans are the most widely spread of any of the beings of Jaeis, and have established many kingdoms and cities. They live in houses and man-made dwellings above ground and tend to cluster around cities and centers of industry. Human dwellings center around immediate family. Commonly, multi-generational households are found. As beings somewhat foreign to the planet, Humans are uneasy when forced away from the comfort of their cities and others of their kind, and into the wilderness.

Humans are very concerned with concepts such as bloodlines, kingdoms and territory. Despite their abundant presence on the planet, Humans are viewed as outsiders by many of the other races, since the creation stories do not list them and many tales tell of their vagabond beginnings on the planet. Humans possess little coherency as a race, often quarreling over small matters or their many differences of opinion. They are the founders and main proponents of Industrialism.

Humans favor burial as their favored means of funeral rite, and procreate at a much faster rate than any other race.

Humans have, since their arrival on Jaeis, been extremely close with the Goblyns. Goblyns have been historically bound to Humans, dedicated to protecting and serving the Human race. Humans respond to this with either appreciation and love, derision and abuse, or apathy and ignorance. One thing is for sure: even after the Proclamation of Goblyn Independence, Humans can no more get away from the Goblyns than they can stop breathing. Humans, despite their adverse reputation for being planetary squatters, have built relationships with all the other races of Jaeis for good or ill. In the South, the humans take strongly to the Zjenithi, who maintain a powerful presence there. Humans often find themselves attracted to members of other races. While most other races see this as distasteful and taboo, humans generally accept inter-species relationships, although there are exceptions there, as well.

Human beings are driven by emotions. They are selfish, on the large, valuing the individual above all. Most Humans seek to build relationships, achievements, and/or power. Given their relatively short lifetimes and occasional frailty, Humans want it now, and they want it big. They search for meaning in life and are constantly asking existential questions and wandering off to find the answers.

(Note: It should be mentioned that the races of Men and Humans are essentially the same race spread between the two distinct worlds of Jaeis and Halestia, since both races possess the same powers and physiology, but the differences between Men and Humans is found in their cultures, and so they are mentioned separately here.)