Life cannot exist without spirit. It is the breath inherent in all things. Spirit permeates and surrounds the world of Immortal Legacy and all who dwell there. Those who have opened their eyes to the world of the spirit recognize solitude as an illusion — all life is woven together by threads of fate into the fabric of reality. We are all cut from the same cloth as the mountains, trees, stones, beasts… even the Immortals themselves.

The strong-willed can utilize the spirit power within to channel, infuse, divest, or block the spirit around themselves and in other creatures. These spirit wielders come from all walks of life and go by many titles. Among their ranks are found spiritual caretakers like shamans, priests, and monks. There are also those who serve as champions, such as paladins, samurai, or kensei. Further still, martial artists may serve no higher power, but harness their spirits to lethal effect.

In this game, those who tap into the power of life itself are known as spirit artists. They recognize the precious balance of the positive and negative sides of spirit power. Spirit artists have gained special insight into channeling it, controlling it, and using it to their benefit.

The Game Master holds the final say on the availability and use of spirit power in the game. One GM might tell a story in which all characters touch the forces of spirit, while another GM could assemble a world where spirit power is distant or nonexistent.

Most folks don't know exactly how spirit power works… if they're aware of it at all. Some might say that good and evil are tangible forces in the universe and they manifest as positive and negative energy — one can serve either side or fight to maintain the balance. Some might believe all of nature has an intrinsic spiritual essence; every mountain, river, and living thing possesses an eternal spirit.

Spirit artists use their own life force as a tool to interpret and influence the fabric of spirit power. Some call this process meditation or prayer, while others call it qigong or kiko. The concept of spirit power is present in every culture that exists, so it goes by many names, for instance: qi, ki, manitou, orenda, prana, or pneuma.

Some believe that spirit artists are Called and gifted the ability, while others believe that any willing creature can learn the secrets of qi. Some don't see a difference between the two — why would mortals desire to hone their spirits unless higher powers had willed it? Regardless of the source of their power, spirit artists rely on patience, faith, willpower, and discipline to focus their energies and perform spirit arts.

Spirit arts are the techniques which spirit artists perform to produce extraordinary effects. Performing any given spirit art may require a specific stance, a certain state of mind, or a precise chant.

Any character capable of performing spirit arts is free to acquire new ones as desired. The spirit arts listed in the next chapter each identify a rarity: the likelihood your character can locate and practice it. The knowledge necessary to perform a spirit art may come from a wrinkly old master's instruction, revelation from the powers that be, or exploring your very soul. The higher the rarity, the more outlandish quests your GM can throw your way to seek it. Regardless of the means of discovery, perfecting a spirit art requires arduous practice.

Like spells, spirit arts have a target: another creature, an area, an object, or oneself. Spirit arts which cause negative or unwanted effects permit the target to make a skill check to avoid them. Again, just like spells, this skill check is referred to as a save. Each spirit art in the next chapter identifies its associated save.

Every living creature possesses an inner well of energy represented by Spirit Points (or SP). Performing spirit arts drains this well. Meditating and resting replenishes it.

Characters begin the game with 10 SP. A practitioner of spirit arts can add his Self-Control score to his total SP. As the game progresses, a spirit artist can further increase his SP total by purchasing the Enlightened trump.

The Five Ways are the routes by which all spirit energy in the cosmos moves. When spirit is transposed, the result and reaction depends on which of the Five Ways was involved. Those who walk the path of the spirit must navigate using one or more of these. 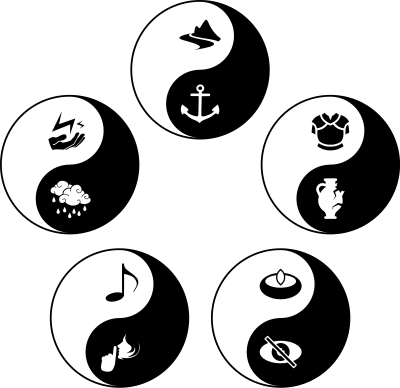 Throughout the universe, the active and passive aspects of spirit power are under a constant state of waxing and waning, always seeking a natural balance. Within each of the Five Ways, spirit is polarized into motions — one positive and one negative. Spirit artists can practice as many of the ten spirit motions as they like, but must gain skill ranks in each.

The Way of the Aura

The Way of the Form

Augmenting
Reinforcing or boosting the properties of a physical form

Eroding
Degrading or sabotaging the properties of a physical form

The Way of the Hand

The Way of the Step

Anchoring
Preventing or undoing the movement of spirits

The Way of the Voice

Motivating
Exerting will over creatures to elicit action

Hindering
Removing the will of creatures to prevent action